Climate change and habitat fragmentation are the largest threats to ecosystem globally. However, not all species are expected to respond equally, leading to widespread changes in community composition and ecosystem functioning. Working with José Montoya at the Station d’Ecologie Théorique et Expérimentale, I aim at better understanding the role of climatic warming and habitat fragmentaiton on biodiversity, community dynamics and ecosystem functioning in multitrophic freshwater communities. We use the Aquatron, an experimental system composed of connected ponds in which temperature can be manimulated, to understand how phytoplankton and zooplankton communities respond to long term warming and fragmentation treatments.

My work with Julien Cote focuses on the impacts of climate change on the common lizard Zootoca vivipara, both at the population level – impact of temperature on lizard population and metapopulation dynamics and persistence – and at the individual level – how individual phenotype plays a role in adaptation to climatic conditions. 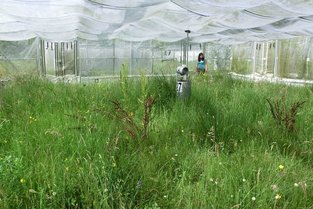 Other interests include the impacts of predation risk on lizard behaviour and phenotype. Specifically I worked on the maternal effects of predation risk on offspring phenotype and dispersal. Collaborations include a work on the non consumptive impacts of top predator cues on four-level food webs with Julien Cucherousset (EDB Laboratory) and an ongoing work with Joel White (ENFA) and Staffan Jacob on the impacts of climate change on lizard intestinal microbiota. Finally on the modelling side I developed a project with Robin Aguilee, Julien Cote and Felix Pellerin, on the impact of phenotype- and condition-dependent dispersal on climate-driven range shifts. A past work with Jean Clobert and Sylvain Moulherat focused on the development of an individual-based model of metapopulation dynamics integrating dispersal in an explicit landscape to serve as a flexible platform for Population Viability Analysis.